Proposal: add custom close reason for questions that are not about the Spanish language

Context (TL;DR at the end)

As y'all probably know, when you flag a question as off-topic, there are a number of reasons available for you to pick.
Since every stack is different and there's some degree of "off-topicness" specific to each site, mods are allowed to include up to three "custom" reasons in that list. Spanish.SE currently offers two custom close reasons:

On top of that, there are some standard reasons that you can also choose:

Here you have the four options in all their glory:

So far so good, all bases covered. Kind of. You can always pick "nothing to do with Spanish" for off-topic questions that do not fall into any of the custom categories.

The problem arises when you notice that the "Nothing to do with Spanish" reason is not available for 99% of the users who actually flag posts.

When a user gets to 500 rep, they get the Close Questions privilege. This has a number of (possibly unwanted) consequences:
- It adds a new close reason, "Other", where you must type the reason for closing the question. - It turns every "close" flag into a close vote. - The "Nothing to do with Spanish" option is not available to you anymore.

This is what a user above 500 rep sees when flagging: 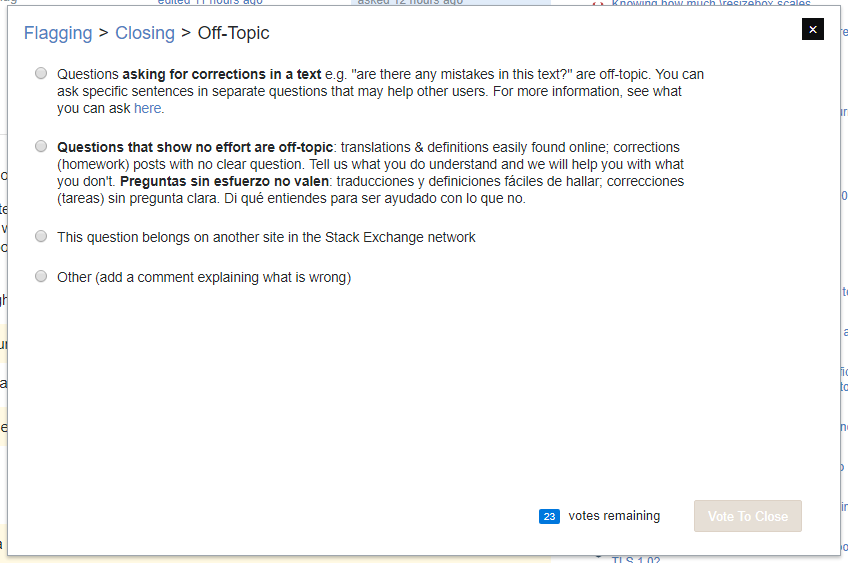 There's no option to say that a question is just not about the Spanish language!

Because of this, users are forced to pick the "Other" option and manually type "this question is not about Spanish". Just like they did here, here, here, here, here, and here (just in the last three months, and I even left some out).

This has been noticed and discussed before, but the actions we took back then didn't tackle this particular problem. What they did, however, was free up a slot for another possible custom close reason.

The "Nothing to do with Spanish" close reason is not available to most users who actually cast close votes, so they are forced to pick "Other" and type a reason of their own. Since we're only using 2 of the 3 possible "custom reason" slots, let's make use of the remaining free one to include this:

This question is not about the Spanish language as described in What topics can I ask about here?. Esta pregunta no versa sobre el lenguaje español según se describe en ¿Qué tipo de preguntas puedo hacer aquí?

as a proper canned reason to close posts to which no other reason applies.

It can be used for blatantly off-topic questions.
It can also be used for several other types of questions which are off-topic as per the rules, but don't have their own reason: translations from Spanish to other languages, handwriting-recognition questions, etc.
And finally, as having to write their own reason might discourage some shy users from casting close votes at all, including this custom reason will solve that too.

IMHO this is a simple change that would be welcome by everybody. 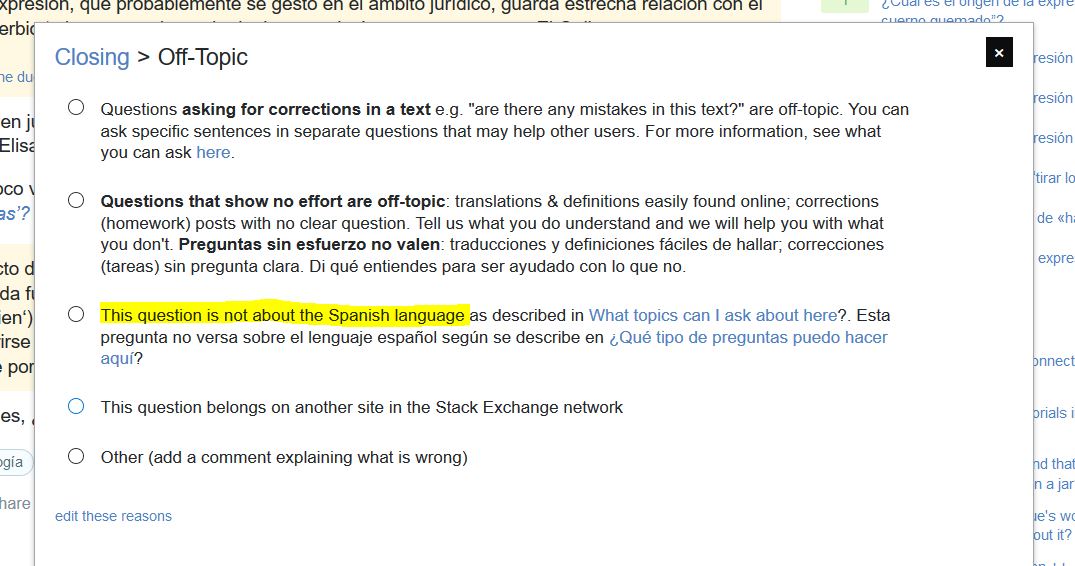 Welcome!
This site is for discussion about Spanish Language Stack Exchange. You must have an account there to participate.
Help

8
Question of English > Spanish and Spanish > English
4
¿Debemos replantearnos los motivos de cierre específicos del sitio para que sean más usables?
3
Proposal: move "Resources for learning" question to the main site
4
Proposal: change site description to "Linguists, teachers, students and enthusiasts"
4
Proposal: make clear that the off-topic "translations" are "translations *from* Spanish to X"
5
Proposal: specify that "translations *to* Spanish" are on-topic
4
How broad is "too broad"?
9
Do we want a different favicon for Spanish Language?
12
Can we get the close and reopen voting thresholds lowered to 3?
4
Canonical question for "required duplicate indirect object" (aka "redundant indirect object pronoun")