Can we get the close and reopen voting thresholds lowered to 3?

This is almost a verbatim copy of a question with the same title on Home Improvement Meta. It goes to the point and I don't see anything to be improved or expanded.

This has been tinkered with on Stack Overflow and several Stack Exchange sites. SO has now gone to 3 permanently and Shog9 commented:

Other sites can have whatever threshold is most appropriate for them

We are "other sites".

There's only a handful or so regular reviewers in general (of the non-mod variety anyways), and closure tends to be a pain: it takes days to have a question closed. Lowering the threshold to 3 would ensure faster community response time.

In short, let's set the close and reopen voting thresholds at 3 instead of 5. As this is a feature request, you can use the upvote and downvote to show that you are for or against the proposal.

As read in CM Catija's answer to Is it possible to reduce the number of close votes needed for certain types of close reasons? in Japanese.SE, this change is not straight-foward:

The number has to be the same for every close reason but we can change the number required to close a question to 3 or 1. We've run a couple of tests on other sites and are willing to test it on others. If you'd like to run a test here, have a discussion about it and then have one of your moderators ping me once you've made a decision.

I have a handful wanting to test in January already and I'm not sure how many I can do at once but what I generally do is a one-month test and then we compare some stats before and after to see what impact the change had. We're being cautious about making the change permanent from the outset because there's some concerns we want to avoid.

Here's some examples of sites that have tested this out or are asking whether they should on their metas:

I've made the change - main site requires only 3 votes to close or reopen. I'll see if I can look at time to close as another element for this.

As of September 28th, the testing phase of the three vote close/reopen project is completed and the results have been posted. The next step is to reach out to the outstanding sites and explain the next steps and give an overview of the potential outcome of the test on those sites...

Here are the two graphs from the queries I've been using for the duration of this project. Both of these graphs involve a period from 1 February 2020 until 27 September 2021.

This first one represents your close review completion percentages grouped by month: 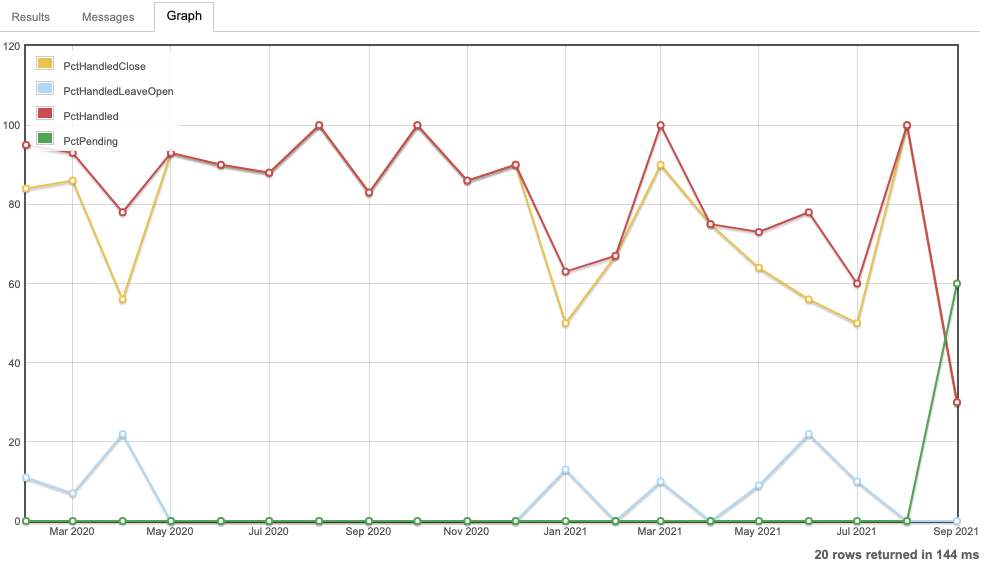 In the grand scheme of things, these numbers are pretty good, even recent numbers that are closer to the 60% completion rate are better than many of the sites requesting this change. That said, it looks like there's been some struggle recently to keep the percentages high, so perhaps a slight boost by lowering the votes needed to close and reopen to three will be beneficial.

The second graph is the number of questions closed or reopened with moderator involvement vs user-only close and reopen. It also shows the total number of posts closed and reopened to more easily see the aggregate numbers. 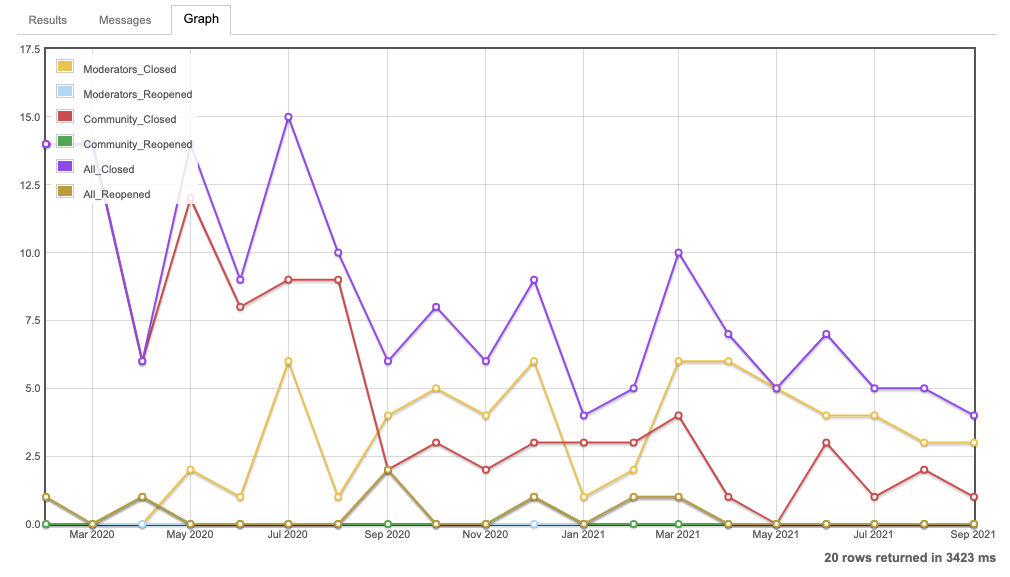 When I look at the numbers here, I do see that the moderators have had to take over some of the closing on this site in recent months but, at the time of posting this question (which I've also checked) this site closed, on average, no more than one question every two days.

So, while I'm not saying "no" to the request here, I'd like to have some help seeing what I'm missing. I completely understand that needing to close posts can be challenging at times and in recent days there's certainly more need for this change - but I'm trying to see what's going on?

Are there many questions that should be closed that aren't being flagged for closure? If so, that's a separate problem that this won't fix.

Are there too few people participating in review to get questions closed?

This graph shows the number of people casting close votes in any given month (note the range on this graph is wider, going back to January 2019 - also, the bottom is at 6, not 0, which gives a very scary feeling to the totals). 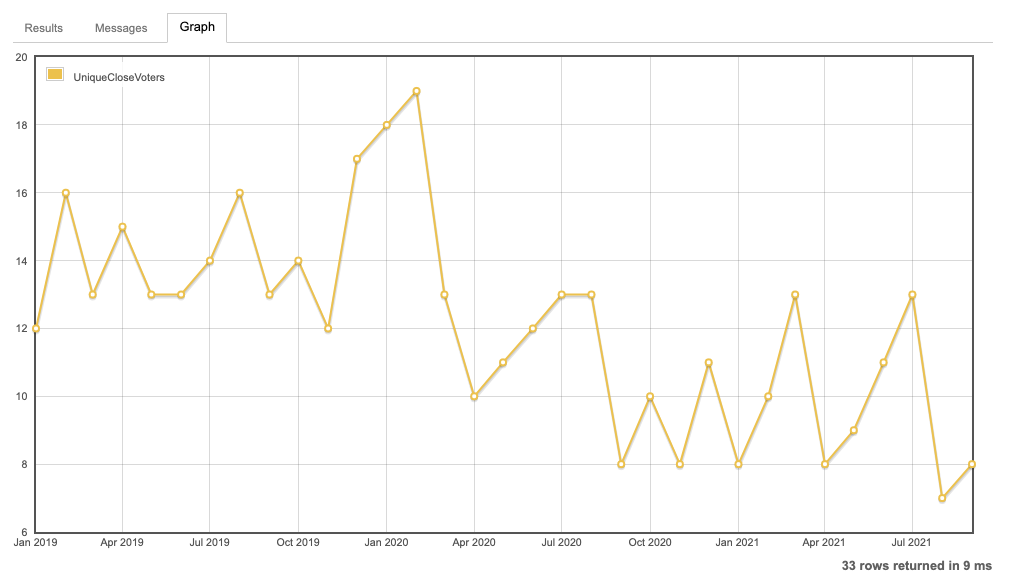 It looks like y'all have lost about a third of your voting participation and that is concerning. I'd be interested in understanding why those people stopped reviewing.

That said, in the recent leaner months, it's likely necessary for all of your voters to vote on nearly all questions nominated for closure - and that count of voters includes mods. Lowering the votes needed to close and reopen to 3 will reduce the strain on those who are still participating in closing and reopening posts but I think it'd still be good to understand the other concerns - if we don't take those into account, this may end up being a futile change since whatever drove those people away may also eventually cause the remaining reviewers to leave, too.

Barring an emphatic response, I'll change the votes needed to close and reopen posts here from 5 to 3 on Monday, 4 October 2021. If you feel like the notice period for this change is unnecessary, let me know and I'll turn it on sooner.

Testing of three-vote closing is starting on Thursday, May 6 on 12 SE sites, and we are not one of those sites. The test will last for 45 days, and then the results will be analyzed. After that (which will also take some time), hopefully we will get a chance.

The close vote count threshold has now been requested to be lowered to the CMs. The CM Catija has added Spanish.SE to the list of sites in which this will be tested.

Let me make a further suggestion.

Since many of us who post on this stack are scientists of one variety or another we should really do an experiment before making a permanent change. I propose that we ask for something like the experiment which ran on StackOverflow with similar metrics and then look and see what happened. I will repeat the link here https://meta.stackoverflow.com/questions/391832/we-re-lowering-the-close-reopen-vote-threshold-from-5-to-3-for-good although it is also in the original question which prompted this thread.

Once more, I'm going to play Devil's advocate and disagree with the most popular idea and propose a different option.

I do agree with the assessment and feeling presented in the question. On the other hand, lowering the threshold makes me feel like we go with the easiest option (nothing wrong with that) and we just give up on our efforts of involving more community users in the moderation duties (I should say, in the "extended participation activities", since we have tried unsuccessfully to get more participation in Meta, as well as in the review queues).

While lowering the number of votes could be a potential solution, would we reverse this if the activity in the review queues increases? If the review pace gets even worse, will we lower the threshold again?

My proposal is this:

Let the moderation team participate in Close and Reopen queues.

(Meaning, let's make the mods not wait until it's blatantly obvious that a review queue/contribution became stagnated. Let's take advantage of the fact that the mods are wise, trustworthy and active contributors-reviewers. That's actually why we chose them and why we trusted them with mod superpowers and mod superresponsibilities.)

A long time ago we decided that moderators should stay away from these queues due to two main reasons:

Since not having enough people for reviews has become an issue (I see that close and reopen are specifically mentioned in the question, but not the other review queues) and the current moderation team seems to be formed by top contributors that have a pretty good understanding of what is on-topic and what is not, let's let them participate in these reviews again. Let's trust their binding vote.

I think that this is something that at least we could try for a couple months, see how it works, and if it doesn't or we don't like it we can go with the more upvoted option of lowering the threshold.

9
Provide a button in the editor to insert a sound to an answer
4
Proposal: change site description to "Linguists, teachers, students and enthusiasts"
1
Would moderators please be as quick to reopen as they are to close
6
Proposal: add custom close reason for questions that are not about the Spanish language
2
How do you decide whether to vote to close an iffy question?
9
Do we want a different favicon for Spanish Language?
0
Why doesn't the Spanish site have a "vote to close" option under the question like other sites?
4
Canonical question for "required duplicate indirect object" (aka "redundant indirect object pronoun")
2
Reviving this resources Meta question