I am not sure if I am supposed to write this question in English or in Spanish or both. I will start in English and translate if required.

I was encouraged by @Diego to post this question, from a comment I made when I was looking at ¿Cómo se llama (por regiones) a las notas que se llevan escondidas para copiar en los exámenes?. I was confused by the request made by user @ aparente001 to add a word in English so "so that Spanish learners can find" it.

In principle StackExchange sites, I asume, are English-based, or so is my understanding. That is why I always have a tendency to write in English. However in the "Spanish Language" site I am always unsure of what is the correct approach. 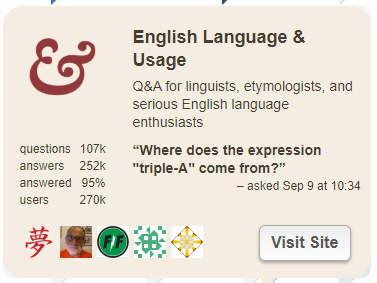 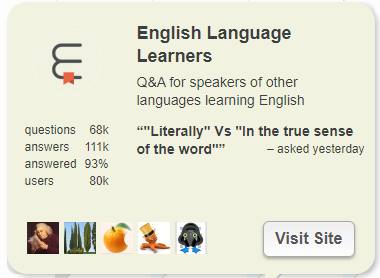 Basically in the Learners site, people that come from another language, with a different mind-framework are encouraged to ask to clarify their English questions. While in the English Usage site questions are supposed to increase your understanding of English, basically are questions from English to English while in the other site are from "XLanguage" to English. Although in both sites everything is supposed to be writen in English.

I always felt the "Spanish Language" site was supposed to be like the "English Language & Usage" site, so basically you don't need to know English to ask something to help you understand/learn more about Spanish. If Spanish is your native Language, I felt, you should be able to ask a question here about Spanish. As you can see the intent of the site declared here seems to agree with me. 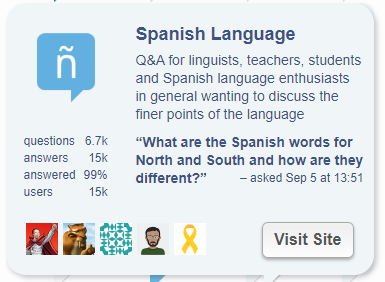 And you can see Diesgo's question is totally in Spanish, someone that had that doubt in Spanish could perfectly understand it and wouldn't need an English word for reference.

A Spanish Linguist doesn't need to know English to study Spanish. However I realize people using this site need some basic knowledge of English. Also the request of adding an "English term" to the question seems to discard people whose primary language is not English. Technically a Japanese with basic English knowledge could ask questions here about Spanish, without ever using any English/Japanese. Just the basic English to understand the buttons and read the FAQ, etc.

What's more in many Language Teaching methods students are encouraged to only use the foreign language and not the native, so if you were English Speaker you wouldn't necesarily need an English word to ask a question here. You could, and probaly would be encouraged by your teacher, to fully ask in Spanish.

PS: I am a Native Spanish Speaker.

Spanish.SE is one of those sites where a different language, besides English, is allowed; namely, Spanish. Being a site about the Spanish language, and with over half a billion potential Spanish-speaking users, it is very convenient for us to allow questions and answers to be made in Spanish, especially the most technical ones which tend to be written by people for whom Spanish is already their native language, but also in general to avoid cluttered posts with lots of quotes and italics and such.

However, that doesn't and mustn't mean that English questions or answers should be frowned upon. Good questions and answers written in English are one of the best ways we have to share our love for Spanish with other users in the network and make them join our community.

Spanish Language Stack Exchange is a bilingual question and answer site for linguists, teachers, students and Spanish language enthusiasts in general wanting to discuss the finer points of the language.

This site is like both. The Stack Exchange network works by creating communities that are needed. Once a current site starts getting a big volume of specific questions, a specific one may be suggested in Area 51. For this, we now have sites like Vi, Emacs and many more whose questions were part of Stack Overflow in the early days.

With language sites it is the same: once a big set of questions may be an important subcategory, a specific site may be created. And this is what happened with English Learners, which launched 4 years ago now, after being proposed 7 years ago as a subpart of English Language & Usage.

I do think we need quite a lot of time in Spanish.SE to get there: currently we have less than 5 questions per day, while each one of the English sites have more than 30 (see stats).

So our site now has both native speakers and learners.

No. Over time we have shifted from mainly in English to whatever-you-want (you can find interesting debates here in Meta.)

If this is not a site for English speakers learning Spanish, then, should we expect everyone here to have a deep understanding of English? Are we supposed to write both in English and Spanish? Only in Spanish? Clearly Diego understands English and he had no issues adding a word in English, however what if he didn't.

Since the platform is in English, every user must have a decent grasp in this language to go through it. Until we have an option to set the interface in Spanish, it will be difficult to have a significant increase of Spanish speakers here. It has been asked and asked again for a while, but it is not in the roadmap of the company, since they stopped admitting international sites on 2015.

In ¿Qué respuestas canónicas tenemos? What are the canonical answers we've discovered over the years? we have a set of canonical answers. We try to keep them in both languages. The rest of the posts may be in one or the other language, since it is a bit tiring to post in both. If you ever find a good post you want to translate, please do so!

In general, questions in English are good to get people from the network through the Hot Network Questions. However, once some time has passed, I see more visits com to the questions in Spanish. I tend to keep in mind What about adding general questions for reference?, so we "catch" users, either from Google or from the network. All in all, just post the way that is easier for you.

I agree with the answers by @rotten and @fedorqui, and would express it this way: our site has all the types of questions found at both ELU and ELL.

There's a fair amount of discussion at ELU Meta about when to migrate questions to ELL. This shows that the line between the two is somewhat fuzzy. Some key differences I've noticed between ELU and ELL are:

I've noticed that Spanish Language allows a wider variety of questions than ELU. In terms of the expectation that the question show what the OP has tried and where they got stuck, I think Spanish Language is a bit more rigorous than ELL.

Other differences I've noticed between ELU and ELL:

I think the short answer to your question is that here we have the best of both worlds.

Not the answer you're looking for? Browse other questions tagged discusión ámbito .

Welcome!
This site is for discussion about Spanish Language Stack Exchange. You must have an account there to participate.
Help

11
List of existing canonical questions AND the place to propose that a question be canonized
6
What about adding general questions for reference?
1
Has anything changed in our policy regarding the language of answers here?

2
New proposed site FAQ
9
Should quotes be in pre-formatted blocks?
16
Should we make Spanish our official language?
12
Can I ask beginner level (grammar, syntax, etc.) questions here?
7
There is no sister site here, similar to ELL for ELU; hence some proposals
3
Proposal: move "Resources for learning" question to the main site
1
Proposal: repurpose "aprendizaje" tag
0
Gentle ways of bringing newcomers into our way of doing things
6
What if there's a question here in a language other than English and Spanish?