Summary: Spanish Language Stack Exchange will begin the nomination stage for a special election on September 9 to bring in two more moderators.

For full details of the process, see the announcement on Meta Stack Exchange. The timeline:

(Note for current moderators: there's no need to nominate yourself even though you'll likely get an email saying you should. The system assumes the first election is a graduation election, which would mean moderators would need to be re-elected. This isn't that sort of election.)

If you have any questions about the process, please stick them in an answer here.

Is the timeline fixed?

Historically, July and August (along with Easter and Christmas) have been low-traffic months for this site. We are already experiencing this: 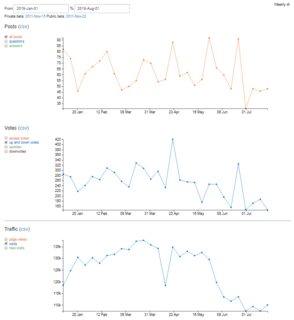 This is because these are the months for summer break in Spain and several Latin America countries (including most of those in the Northern Hemisphere as well as Peru and some regions of Colombia); and, for countries in the Southern Hemisphere like Argentina, Chile... it is rather too close to the end of school's winter break.
Given that a good part of our community is comprised of students, it is understandable that participation on the site goes hand in hand with school periods. For this very same reason, October and November (and maybe the second half of September) are the months with the highest traffic and participation.

I believe it's desirable for any election to have a high voter turnout. Because of this, I think it'd be positive to move the election to the second half of September.

A point could be made about the new mods needing some time to learn the ropes, and a high-traffic period not being the best moment to do so. However, I don't think that'd be an issue: we've been doing OK with just two active mods for some years now; we can survive a couple months more while they adapt, if that means they will be backed up by a greater share of our community.

After 7 days, the top 30 nominees ordered by reputation advance to the primary phase. If there are ten or fewer nominees (but at least one more than the number of moderator slots being filled by the election), then we skip directly to the election phase.

If the number of nominees is less than or equal to the number of moderator slots the election will add, this phase will be extended by another seven days. If this is still the case once the extended period is over, the election will either be cancelled entirely (on graduated sites) or the nominee(s) will be made pro-tem moderators (on beta sites).

On September 16, if there are three or more candidates, we'll run an election. If not, I'll simply appoint the candidates.

Not the answer you're looking for? Browse other questions tagged discusión elecciones .